Last year, we looked at the hymn, O Father Nicholas, which is sung to the same tune as the Marian hymn, Rejoice, O purest Queen (Radujsja Carice). At that time, we made some changes to the melody based on the oral tradition, and the English accents in our text. This blog entry continues that discussion.

This hymn was omitted from the 2007 Byzantine Catholic Hymnal, because it was not in the 1978 Levkulic Divine Liturgies book (which the MCI was directed to use as the basis for that hymnal). Father William Levkulic and cantor Jerry Jumba included Slavonic and English versions in their 1984 Marian Hymnal. Here is the English version: 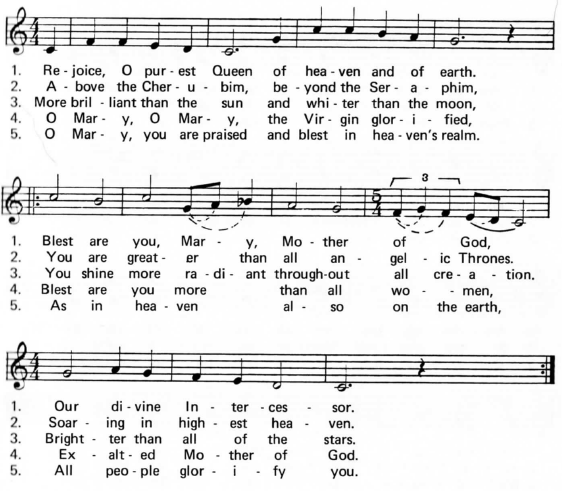 For a comparison, here is how the same hymn is given in Father Stefan Papp’s 1970 collection, Duchovni Pisni:

This has its own issues. AS WRITTEN, it is in a triple meter, like waltz, and a few apparent bad accents in Slavonic. As with some other entries in this collection, it’s not clear how exact the musical notation is supposed to be.

And here is a recording of the same Marian hymn by the Uzhorod Seminary Choir. It goes, more or less, like this, in broad half notes:

This aligns closely with the Cherubic Hymn setting in the Bokshai Prostopinije (1906) and the Papp Irmologion (1970) which uses the same melody:

Now let’s look at how this same melody is ALSO used for the “E” setting of the Cherubic Hymn in our Divine Liturgy book (DL 46):

This is not a bad setting of the Cherubic Hymn, but it is sometimes criticized by cantors for being too short. If sung quickly, it has to be repeated many times; if sung slowly, it can become ponderous. We will come back to this setting later.

I would start with trying to come up with a setting of “Rejoice, O Purest Queen” that could serve as a model for this melody in English; it should be flowing, easy to sing, and capture (wherever possible) the spirit of the various existing versions. It will end up differing from the Slavonic, and we should probably just accept that fact.

The first two phrases in the Marian Hymnal version are quite well known, and match our existing uses in the hymn to Saint Nicholas, and the Cherubic Hymn. Nothing to do here!

For the third phrase, I would keep the scale-wise opening from the Cherubic Hymn versions in English and Slavonic, combine it with the three note pattern G – Bb – A from the Papp (1970) setting, and the falling conclusion from the old version of “O Father Nicholas”, to end up with something like the following:

This is far simpler than the version in the Marian Hymnal, but I think anyone who knows that version of the melody can move to this one fairly readily. (The real proof will be if it works for “O Father Nicholas” as well.)

For the last phrase, keep the version in the Marian Hymnal, but split the first half note (only when needed!) to put the accent in the right place:

Now, if we’re willing to tweak the text just a little: the word “divine”, when applied to the Mother of God, throws many visitors and even some of our own faithful for a loop. Mary is the Mother of God; her intercession is divine in the sense that it is directed to God, but she is not divine. Furthermore, the Slavonic just says “our intercessor.” So we could keep thes secondary sense of “divine” here, avoid potential heresy, AND restore the initial half note, but doing this:

From now on, we will consider the four-quarter-note pattern, and the two ending half notes, to be regular parts of the melody. Here is the entire hymn, with all three verses from the Marian Hymnal: 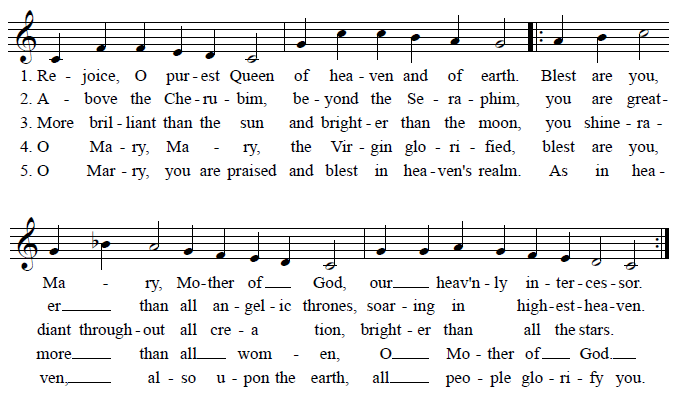 It seems to work; there are no obviously bad accents. So now let’s see what happens with “O Father Nicholas”:

This is certainly a more interesting version than we started with. I hear one bad accent, at the end of the second verse: “that we may seek his REward”, where reward was chosen to rhyme with Lord. We have a couple of options:

There is one more hymn in the 1978 Levkulic Divine Liturgies book that is to be sung to “Radujsja Carice”: namely, the Theophany hymn “Anhely Sohlasno” (along with an English translation, “The choirs of angels sing”) on page 169. Here is what happens if we set this text to the (revised, reorganized) “Radujsja Carice” melody:

These two verses end up JUST differently enough that it might be worth writing them out separately.

Of course, once we are singing the family of Radujsja Carice hymns in a consistent fashion, the E setting of the Cherubic Hymn melody really starts to stand out. Let’s see what we could do with it to more closely match the common melody above, and slow it down a little.

Note than I am NOT proposing replacing the Cherubikon E with this version! But I do want to show the potential benefits of stepping back and looking at what we are singing, and how we are perhaps in a position now to draw some of these strands together.

What do we do about the Slavonic?

Recall the version of Radujsja Carice as sung by the Uzhorod Seminary choir:

There is some disagreement on whether the falling arc (over “Marije” in the first example, over “tajno tajno” in the second) goes all  the way down to the tonic or not.  If it does, we could adopt the same phrase here as in the English:

And here is the result in Slavonic, using the text from the Marian Hymnal:

I don’t know about you, but I find this to be:

As with several of the other Marian hymns, we will have to accept the fact that the English and Slavonic are sung slightly differently. But making this allowance lets both languages be sung more effectively in church.

A note about key signatures

Astute readers may have noticed that the last example was notated in the key of D (two  sharps), while the earlier examples were in the  key of C (no sharps or flats). Why is that?

IN GENERAL, much of our plain chant was written out in the key of Bb (two flats), with do on the middle line of the staff. This allowed for an easy comparison with chant written in the older Kievan “square” notation, which placed do on the middle line as well.  The exact pitch doesn’t matter, since the cantor will adapt the starting pitch to the congregation’s needs in any case.

Later music was written out in a variety of keys. In our green Divine Liturgies book, the essential principal was to keep the melody between middle C and the C an octave up (sometimes up to D), since this range works well for most voices, with men singing an octave below.

Still, we try to require cantors to learn as few key signatures as possible, and the key of C is NOT one of the ones commonly used for our plain chant or hymns. Thus, in the new hymnal, you will see music written in the keys of D (two sharps), F (one flat), or G (one sharp), and of those, the key of D best works with the music we are looking at in this article: Radujsja Carice and all its cousins.